Izzy's Smokehouse is already drawing crowds on the Upper West Side for its popular barbecue.  The Kosher BBQ joint located on Amsterdam Avenue near 92nd Street is known for its fantastic barbecue ribs prepared several ways, along with beef brisket and funky appetizers that draw inspiration from Asia and Mexico. They include things like Pulled Beef Egg Rolls with cabbage, carrots and caramelized onions served with sweet & sour sauce, Korean Chicken Bites served with a Korean sweet sauce, and Smoked Brisket Tacos made with corn tortillas topped with pico de gallo and horseradish mayo.
At the spacious restaurant, food is served on flat trays lined with butcher paper. You will also need plenty of napkins as you dive hands first into those smokey ribs.
The beefy lineup includes 18-hour smoked prime brisket, pulled beef infused with BBQ sauce, and burnt ends twice dipped in BBQ sauce. There's also smoked chicken. Looking for something a bit more substantial try one of four different types of ribs on the menu, including premium Dino Ribs (bulky smoked short ribs), Back Ribs (smoked an glazed with house BBQ sauce), Lamb Ribs (fatty and topped with caramelized onions) and Thai Sticky Ribs (back ribs glazed with a Thai-inspired ginger and hoisin sauce).
Diners will also find sandwiches like pulled beef, smoked fried chicken and loaded chili sausage. Burgers and hot wings also make an appearance on the menu, along with sides like candied sweet potato, baked beans, mashed potatoes and house pickles served with red cabbage.
Photos: Cititour.com
Izzy's Smokehouse is located at 660 Amsterdam Ave, New York NY (347) 425-0524

Chef Julian Medina and Restaurateur Louis Skibar is opening Kuxé, an authentic Mexican restaurant celebrating the roots and dishes of the team behind it. “If the last year has taught us anything, it’s that we truly are all in this together, and that we need to rely on one another to move forward,” said Medina and Skibar.  In turn, the menu celebrates community, family, comfort and tradition, allowing for the chefs to embrace their history with flavorful dishes, while sharing their personal stories.

Sit back with coctktails like Oaxacan Sunsets made with Mezcal, St Germain, guanabana, coconut water, lime and coconut foam, and La Dasy: Sotol with aperol, prickly pear, lime and agave, in addition to a variety of margarita offerings, as well as beer and wine.

The new eatery features homemade recipes using both traditional and modern techniques, and makes its own “masa” from corn sourced directly from Oaxaca, Mexico.  A molino, the traditional corn grinder is used, as well as nixtamalization, an ancient process of steeping corn in alkaline water, cooking it, and grinding it into flour which is then used to make tortillas, quesadillas, tacos, memeles, tetelas and tlayudas.

In a time of chaos and uncertainty, the familiar always offers some relief. Embodying the spirit of the well known Spanish phrase “Mi Casa es Su Casa,” Skibar and Medina hope to provide a sense of comfort to both their employees and patrons with the opening of Kuxé.  As such, Kuxé is meant to reflect habitability, organicity, and the warmth of a home full of childhood memories and dreams, some of which may be related to the cuisine, but all of course, which are intended to make you feel part of a family.

Four new sculptures created by American artist Carol Bove for The Met Fifth Avenue's facade niches is now on view. The Facade Commission: Carol Bove: The séances aren't helping is the second commission to be featured on the facade of The Met.

Born in 1971 in Geneva, Carol Bove was raised in Berkeley, California, and studied at New York University. She currently lives and works in Brooklyn. Known for works that incorporate found and constructed elements with a unique formal, technical, and conceptual inventiveness, Bove consistently challenges and expands the possibilities of formal abstraction. For The Met commission, Bove will offer a striking series of commanding nonrepresentational forms that resonate with modernist styles such as Art Deco and abstraction.

The Facade Commission is part of a new series of contemporary commissions at The Met in which the Museum invites artists to create new works of art, establishing a dialogue between the artist's practice, The Met collection, the physical Museum, and The Met's audiences. The Facade Commission was inaugurated in September 2019 with Wangechi Mutu's The NewOnes, will free Us (September 9, 2019–November 1, 2020).

Photos: The Metropolitan Museum of Art, Photo Bruce Schwarz
Originally scheduled to go on view in September 2020, the commission was delayed due to the global pandemic. The séances aren't helping will be on view through the fall of 2021. 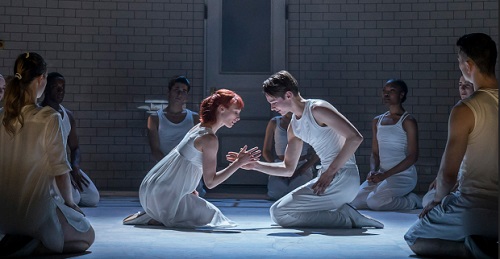 Bourne won two Tony Awards for the Broadway production of “Swan Lake.” His other theatrical productions include “Mary Poppins, “Edward Scissorhands” and “Play Without Words.”

For tickets and information, visit NYCityCenter.org.

NYC-based architect David Rockwell and his architecture and design firm Rockwell Group have joined forces with TAIT, a global leader in the design and construction of solutions for live events, to create OpenStage NYC, a new initiative that utilizes portable staging, to help arts organizations move to outdoor performances this spring. It is expected that the performance stages will utilize streets, plazas, and other public spaces identified as part of the Open Culture program as well as other public performance programs in New York City.

To program the stages, Rockwell Group and TAIT have partnered with the Bronx Academy of Arts and Dance (BAAD!), BRIC, and the LaGuardia Performing Arts Center (LPAC) to help theses arts organizations in book performances in the same or multiple locations within the borough.

LPAC will use the space behind the theaters for programming and plans to work with other Queens-based artists and organizations to tour the borough of Queens and provide live entertainment; BAAD!’s programming will take place on its property in the Bronx and will kick-off with Boogie Down Dance Series performances in mid-April through May; while BRIC has a number of programs planned in Brooklyn.

Last year, Rockwell Group launched DineOutNYC to advocate for public space for restaurants for outdoor dining. In addition to his other architecture and design work, Rockwell has designed the sets for many Broadway and off-Broadway productions, including “She Loves Me,” for which he won the Tony Award, “Hairspray”, “Kinky Boots,” and “The Normal Heart.”

NYPOPS UP TO REINTRODUCE LIVE PERFORMANCE TO NYC